That situation is due to change following an order placed by MRT’s managing director Phil Rawnson at the Southern Manufacturing show in February for a Brother Speedio M140X2 mill-turn centre, plus a Feedio robotic component handling system to supply raw material automatically to the machine and return finished components. The cell, which will be the first 5-axis machining capacity on site, is due to be operational by May 2019.

Mr Rawnson said, “We had been looking to introduce automation into our machine shop for several years, as we see it as the future for our company.

At present we operate a day shift with a few hours’ overtime in the early morning and evening. The Brother cell will add to this by allowing us to run lights-out for up to eight hours, depending on component size and cycle times, as well as unattended during the day. We expect it to have a big impact on our productivity.”

The first family of components to be produced on the new automated equipment will be a family of aluminium bodies for a range of LED light fittings. Initial prototypes have been produced on twin-spindle lathes with live tooling, but the problem is that only around 30 per cent of the machining content is rotational and the remainder prismatic. Ideally, the reverse should be the case if a part is put on a lathe, so that the power of the main spindle can be exploited for turning, while the use of less powerful driven tools constitutes a smaller part of the cycle.

Before the latest Brother order was placed, Whitehouse Machine Tools carried out cutting trials at its Kenilworth showroom and technical centre, demonstrating that the cycle time for producing the light fitting bodies from billet could be almost halved from 15 to 8 minutes.

Efficiency on this scale for the prismatic element of a machining cycle is delivered by a 16,000 rpm spindle with 0.2 second start / stop time, 30 m/min cutting feed rate, 50 m/min rapids, 0.9 second exchange of the 30-taper tools from the 22-position magazine, and repositioning in four of the five CNC axes simultaneously together with tool change. Synchronised tapping is world-leading at 377 m/min peripheral tap speed.

With 30 per cent of the cycle being rotational, the Speedio’s integrated, direct-drive, C-axis motor powering the 2,000 rpm turning table with 0.3-second start-up from zero to full speed is also important. The A-axis trunnion holding force of 400 Nm without the need for a mechanical clamping mechanism delivers rigidity when turning parts in the horizontal plane as well as when milling them at an angle.

When not performing a turning function, the C-axis and +120 / -30 degree A-axis can be employed to position a component in the two rotary axes for 3+2 prismatic machining, as is the case for the aluminium body, but the Brother CNC-C00 control is also capable of 4+1 mill-turning by interpolating the X / Y / Z travels (200 / 440 / 305 mm) with one of the rotary axes. 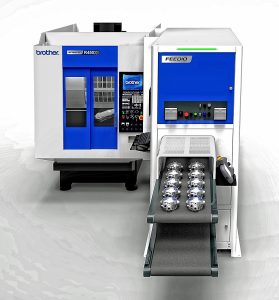 The plug-and-play Feedio automation unit communicates with the machining centre via a Profibus interface. It is supplied with a 6-axis ABB robot and the manufacturer’s smart teach pendant incorporating a customised Speedio page. The robot is equipped with interchangeable grippers capable of handling MRT’s billets, which are up to 80 mm diameter, or aluminium castings to 120 mm diameter, delivering them to a hydraulically actuated chuck on the machine table.

A vision system and built-in PC allows the robot to detect where on the upper inlet conveyor of the Feedio a workpiece has been placed. After machining, components are returned to an output conveyor positioned below the first for compactness.

Mr Rawnson concluded, “We plan to target a wide range of different components for production in the new mill-turn cell and will be looking in particular at parts where the turning content is less than half of the cycle.

“If it is higher, we will continue to produce the component on a lathe unless there is a compelling case to transfer it to the M140X2 to take advantage of its 5-axis milling capability.”