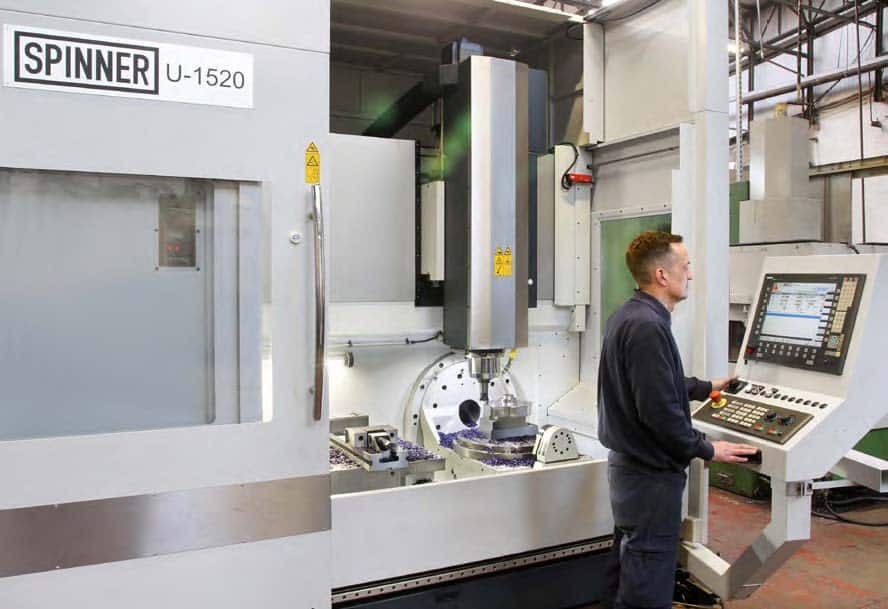 Established in Blackpool 21 years ago, Entech Engineering has within the past five years invested in a new, purpose-built factory as well as modern inspection equipment and new machine tools to keep in the forefront of technology. The company specialises in the manufacture of original and replacement manipulation tools for tube in a wide variety of diameters, wall thicknesses and materials, catering for a similarly extensive range of bend diameters.

The amount of tube bending carried out by manufacturing industry in the UK, while extensive, is limited by the size of the market. Looking for growth opportunities, a few years ago Entech’s owner Garth Moreton started producing complex prototypes and other one-off items. He also took on low volume production work for the automotive, aerospace, Formula One, furniture, leisure and medical sectors.

The same machines that produce the bend dies, wiper dies and mandrels for tooling are employed to undertake subcontract work. They comprise five 3-axis machining centres with indexing fixtures and X axes up to one metre, plus a couple of CNC lathes.

Contract machining accounts for a relatively small proportion of turnover. So last year (2015), Mr Moreton took the decision to expand this side of the business and set about acquiring a new machining centre that could undertake the widest possible range of work in terms of both size and complexity.

After much research, he decided on a German-built Spinner five-axis machining centre with 40-taper spindle and a 1,520 x 520 x 460 mm working volume. It was installed in April 2015 by sole UK sales and service agent, Whitehouse Machine Tools.

Mr Moreton explained, “When producing bend tooling, you know roughly what size of part you are going to have to machine, whereas on the jobbing side, the next component could be small and intricate or a metre and a half long.

“We knew we needed a five-axis CNC machine to maximise the variety of work we could tackle. It also enables economies and faster lead-times by cutting down on the number of set-ups. But large, five-axis plant tends to be very expensive.

“The answer proved to be the Spinner U5-1520, which is essentially two machines in one. It comprises a five-axis machining station at the right hand side of the working area, which uses the three linear axes and two rotary axes provided by a trunnion-mounted, 500 mm diameter, rotary table.

“By positioning it in the horizontal plane, a long component measuring up to 1,520 mm can be laid across the rotary table and the fixed table to the left of it. Three-axis CNC machining can then take place throughout the whole working area.”

The first component put on the machine could, however, fit comfortably onto the fixed table alone. For the 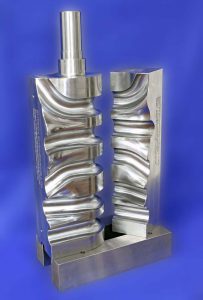 Attempts were made to machine a similar segment on one of the older machining centres on site. However, vibration of the 35 mm diameter,indexable-insert ball nose milling cutter made it very difficult to hold tolerance. Moreover, tool life was poor; 10 sets of 10 mm diameter button inserts were used for the roughing and finishing passes.

When the component was machined on the Spinner using exactly the same cutter, the improvement was dramatic. Higher speeds and feeds increased metal removal rate by more than 50 per cent, while tool vibration was not discernible and only two sets of inserts were

needed to complete the job. Not only that, but the resulting surface finish was so good that only a minimal amount of subsequent hand polishing of the tool was needed.

Of the machine design, Mr Moreton commented, “I am wary of five-axis machines on which the rotary table is in a fixed, horizontal plane, as the fifth CNC axis has to be provided by a B-axis spindle head, which I believe compromises rigidity and accuracy.

“There are a number of trunnion-type, five-axis machines on the market, but unusually on the Spinner the axis of rotation is from front to back. It gives added versatility by allowing the fixed table to be positioned adjacent to it in the X-axis, enabling the machining of long components that straddle both tables.”

When placing the order for the U5-1520, again with versatility of machining in mind, Mr Moreton specified the inclusion of a number of options including high pressure coolant at 22 bar, elevated spindle speed and rapid traverses, a tailstock to support shaft-type work when the rotary table is vertical, a Blum TC52 tool probe and a TC54 probe for component datuming. 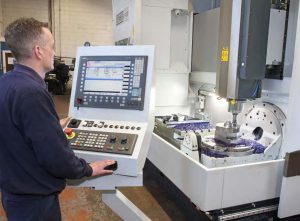 The latter is particularly useful for increasing productivity through the reduction of setup times. According to Chris Law, the company’s first apprentice 20 years ago who was promoted to director in 2015, instead of having to clock parts into position it is simply necessary to probe the component surfaces and the necessary offsets are input into the control automatically.

If the component is clamped in an orthogonal position, there is a five-minute time saving, but a full 20 minutes can be saved if the component is being set up at a compound angle on the rotary table. After the component has been machined, the same probe may be used to check that the part is within tolerance before it is removed from its fixture.

Another advanced feature of the installation is the inclusion of CCTV cameras within the working area, allowing Mr Moreton and his staff to monitor machining on their laptop or mobile phone out of working hours. It gives added confidence when leaving the machine to run unattended overnight.

Mr Moreton concluded, “Installation of the Spinner machining centre has been a resounding success, so much so that if the machine is free we will always put the next job on it rather than on one of the other machining centres. I wish I could put every job on it.

“Several of us went out to the Spinner factory near Munich to see how the machines are produced and were very impressed.

“We have since built a good working relationship with Whitehouse Machine Tools and any issues have been resolved quickly over the telephone.

“We are currently working a day shift plus some overtime in the evenings and on Saturday mornings.

“So we have a lot of potential spare capacity on the U5-1520. If the right work comes in, we will increase weekend working and consider putting on an extra shift.”

R450Xd1 / R650Xd1
Blog
Are the benefits of Automation only for Mass Market Manufacturers?
Blog
Can Machine Tools be Energy Efficient?
Stock Machine