Can Machine Tools be Energy Efficient?

The latest generation of SPEEDIO machines from Brother Industries in Nagoya have been designed to reduce energy consumption as well as cycle-times.

Helping the environment as well as your energy bills

This range of high-speed vertical machining centres utilise a range of measures to minimise the amount of energy consumed when compared to previous generations of Brother machines, or competitors’ machinery.

Initial reductions are achieved through a series of enhancements, such as specifying a CPU that consumes less power, reducing the number of fans in the NC cabinet, using an LCD backlight and deploying an automatic power-off function on the lights.

Further reductions are delivered through the use of latest technology Coolant Pumps, Servo Controls and Interior LED lights, all developed specifically to consume less power.

As well as reducing the energy consumed, Brother’s philosophy of “low-mass, high acceleration” or “lightweight, low inertia” design, also means that the amount of energy lost due to sliding is minimised.

Not just Power, Air too

The environmental savings are not limited to electricity. Focus has been placed too on air-saving technologies. Measures such as optimised air-blast timings and an extremely air-tight air purge structure, help achieve reductions in the amount of compressed air needed.

More significant, savings have been accomplished through the use of Power Regeneration Technology – based on the principles of KERS from Formula 1.

Where other machines emit the power generated through resistance when the motor stops as “heat”, the new generation of SPEEDIO machines harness this power, converting it to electric current, for re-use.

On certain power intensive cycles, such as those that require multiple spindle start/stops to/from high speed (for instance tapping), this power regeneration capability can result in dramatic reductions.

For example, when compared to a BT40 machine, a programme consisting of mainly drilling and tapping uses 60% power when run on the new SPEEDIO W1000Xd1. Likewise, a programme made-up of mainly milling and end-milling uses 30% less power. 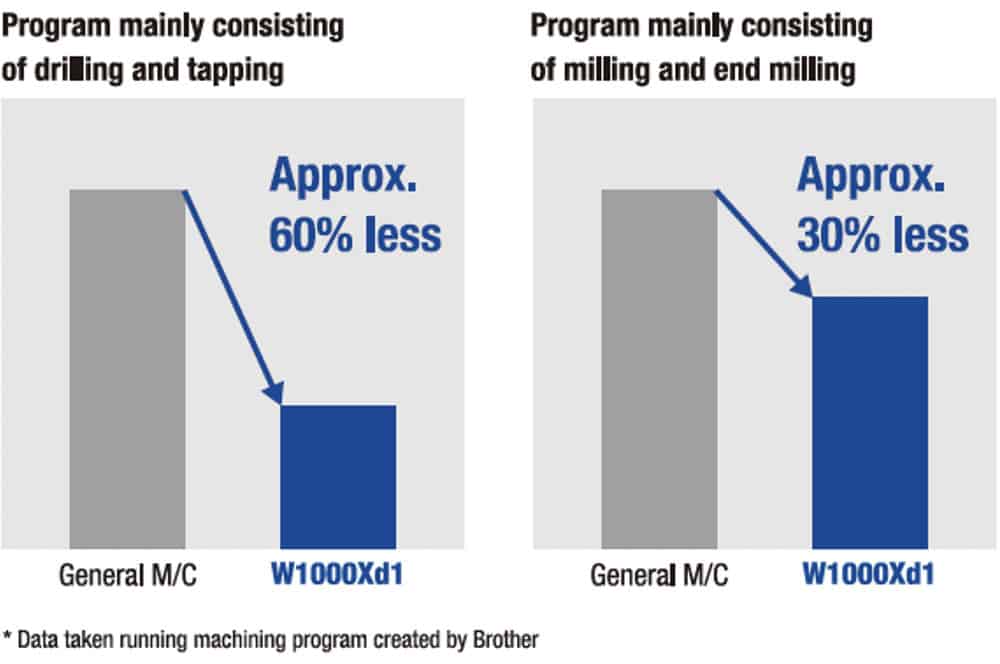 Similarly, the use of IPM technology (interior permanent magnet) on the high efficiency Spindle Motor improves responsiveness when compared to the conventional induction motors used on other machine tools.

This enhanced responsiveness results in reductions to cycle times which in turn delivers further reductions in power consumption.

Cycle times and therefore energy savings are further reduced by other features on the new SPEEDIO machines, such as simultaneously performing Tool-Change and positioning XYZ axes.

Brother’s long-established belief in the efficiency of BT30 Spindle technology has also been proven deliver benefits in a similar way, with BT40 machines shown to require up to 4 times the power to produce the same components.

So committed are Brother to making their latest machines “Earth Friendly”, their Engineers have even included an App on the new D00 control that enables users to monitor exactly what power is being consumed.