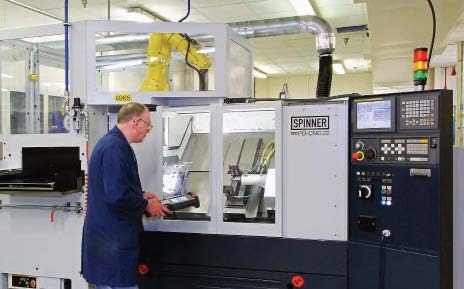 Since June 2013, sleeves and spools for servo control valves have been hard turned by Eaton Fluid Power, Havant, in a robotically loaded CNC lathe built by the German firm, Spinner, and supplied through UK agent, Whitehouse Machine Tools. The high precision production cell has slashed cycle times by up to 600 per cent compared with grinding, reducing manufacturing costs, while accuracy and surface finish have been maintained.

An additional annual saving of more than £20,000 results from a significant decrease in scrap, the cost of which has fallen from £2,000 to £116 per month. The loss was mainly incurred during sleeve set-up and sometimes represented as much as 30 per cent of a batch, which was problematic as Havant is a high mix, low volume production environment, so changeovers are frequent.

The automated lathe took over from two ageing grinding machines, an internal model for machining the inside diameters of the sleeves and a centreless model for plunge grinding the outside diameters of the spools. Capital investment in a single lathe, which will pay for itself in 2.5 years, was significantly less than the cost of replacing two grinders. 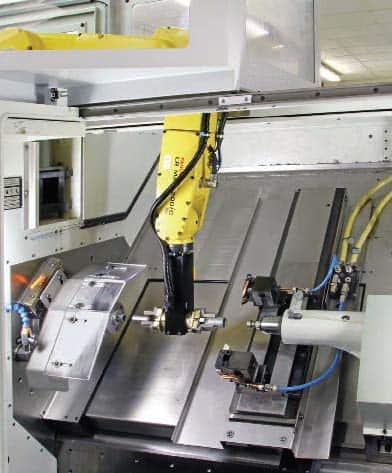 Stephen Camburn, Manufacturing Engineer at Eaton Fluid Power, had already been involved in hard turning in a previous job and knew that competitors in the hydraulics sector had adopted the process. This was not the case with many staff members during the development phase, however, many of whom were highly sceptical. The situation was not helped by the failure of the first potential lathe supplier to develop a viable hard turning solution.

One year on, the decision to go down the hard turning process route instead of grinding is paying dividends and has now silenced the sceptics. Anyone thinking of adopting the technology may be interested in the experiences of Mr Camburn and of Mark Oakley, Process Focus Team Manager, in establishing a capable, high precision hard turning process.

Background and the need for investment

Four sizes of cartridge valve containing a sleeve and spool assembly are manufactured by Eaton Fluid Power in Havant. Its hydraulic products are used for a wide variety of applications, such as in off-road plant, wind farms and paper presses.

The previous production route for both sleeves and spools was to turn the steel components in their soft state on a CNC lathe and send them out for case hardening to 58 – 63 HRc. Grinding of each component then had to be carried out in two operations to produce the diameter and the angled seat respectively. Each sleeve and spool took between 3 and 6 minutes to grind. These cycles have been reduced to 60 seconds and 90 seconds respectively in the Spinner hard turning cell.

The trigger for change was a fault on the centreless grinder that would have been expensive to repair. The machine failed at a time when there was a need to raise production capacity to meet increased worldwide demand for cartridge valves. A decision was taken to subcontract sleeve and spool manufacture while various options were considered.

Blank sleeves and spools were sent in their hardened state, together with drawings and details of the case hardening treatment, to three potential CNC lathe suppliers. As stated, one company could not achieve the required result, while another’s quote was too high to amortise the investment quickly enough. The third manufacturer, Spinner, which has a strong reputation for supplying precision hard turning machines, proposed a solution that was within budget. 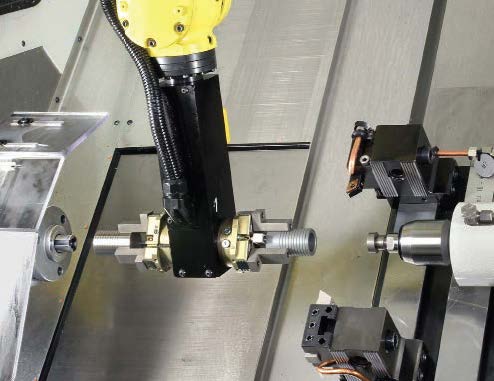 Sample parts were produced in Spinner’s Munich factory, where two grinding operations were replaced by a single hard turning cycle to finish the sleeves and spools, immediately gaining a fundamental improvement in geometry by eliminating a second operation. However, it was not without considerable engineering effort.

Once it was determined that the sleeve bore was relatively straightforward to turn within tolerance by clamping on the OD, the focus turned to the spool, which all parties at the outset thought would be less problematic. It was assumed that using a mandrel to support and clamp the part while it is machined would produce the right result.

However, simply clamping the spool internally was found not to be a viable option. So Spinner engineers decided to try gripping the free end of the spool axially with a flat centre in a tailstock, while supporting the part in the spindle using a pilot mandrel that reached to the bottom of the blind bore.

The change added to the project cost, as a tailstock had to be included in the machine specification. This in turn meant that a Spinner PD-series lathe was needed, larger than the originally envisaged SB model. Moreover, the 6-axis robot with double gripper that loads and unloads the components had to be positioned outside the machine, rather than within the working area. All of this raised the overall price of the hard turning cell by about 30 per cent.

It was still much cheaper than having to buy two grinders, however. At one point, consideration was given to purchasing two lathes, one for sleeves and another for spools, and feeding both with a single robot. This was unnecessary, however, as the efficiency of the Spinner cell allows the required output of both components to be produced in a single shift. 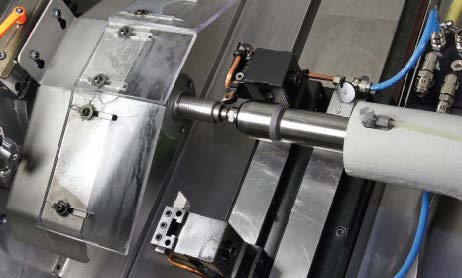 Even though the accuracy of the components was now satisfactory, there was a nagging doubt in Havant about the theoretical possibility of leakage from turned sleeves 2 and spools. Single-point cutting necessarily produces a spiral on the surface along the length of the bore and OD respectively, albeit the peak-to-trough after the finishing pass is one tenth of a micron. There was concern that hydraulic fluid would leak through the spirals in the side walls, and also possibly through the seat face.

So before the lathe was ordered, exhaustive trials were performed on valves containing the four possible combinations of ground and turned sleeves and spools. Each combination underwent 10 million cycles, 24/7 for about six weeks, with the leakage rate checked at intervals.

There was found to be little difference in leakage by introducing turned surfaces and seats. In fact, as time progressed, the turned-toturned surfaces actually bedded in better than the three other combinations.

Eaton Fluid Power put this down to the ability of hard turning to hold better run-out accuracy. Drawing tolerances are 5 microns on the sleeve and 3 microns on the spool, but the Spinner lathe can hold 1 micron.

It is very difficult to achieve this level of accuracy with grinding, as two operations on each component are needed.

The geometrical relationship between the sleeve and the spool in fact makes a bigger contribution to the performance of the valve than the dimensional tolerances.

Now that the diameters and angled seat faces are being turned in one cycle, not only do the side walls fit better but there is also a coining effect due to light impact between the turned seat faces during valve operation, leading to better leak resistance. 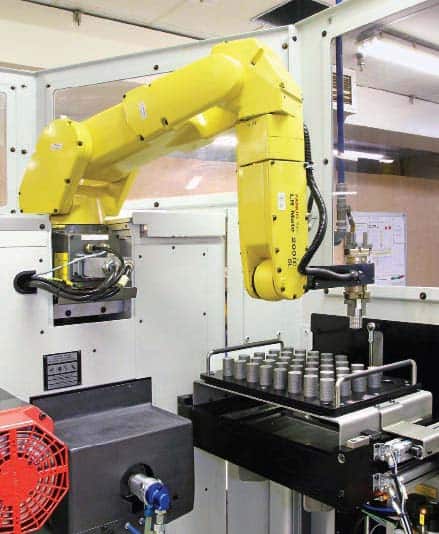 Fears were allayed at Havant and the sceptics became advocates of the new process. The order was placed on Whitehouse Machine Tools and Spinner started building the lathe at its Munich factory before transferring it to the manufacturer’s Stuttgart facility for the robot, grippers, pallet system and peripherals to be added. The fact that Spinner would be a single source of supply for both machine and automation was particularly attractive to Eaton Fluid Power.

Stephen Camburn visited Germany for a week to witness thirty of each of 10 key sleeves and spools programmed, set up, tooled and successfully run off. The cell was duly passed off.

He was accompanied by Spinner’s Sales Manager, John Branson, and representatives from the UK agent, Whitehouse Machine Tools. The Kenilworth firm provides machine warranty, first-line servicing, routine maintenance and applications back-up under a sole agency agreement. The agent was also present during installation and commissioning of the machine in a climate-controlled room in Havant so its staff could familiarise themselves with the process and so provide effective support.

Mr Camburn was able to make economies by producing a data matrix of the many families of sleeves and spools, which comprise more than 200 component variants. The number of clamping elements needed to secure them could thus be rationalised. The exercise was helped when it was noticed that there were a number of slightly different features across various parts that could be redesigned so that the dimensions were common.

As of April 2014, the Spinner cell is producing 82 per cent of the sleeve and spool part numbers, all except the 10 passoff components having been re-engineered in Havant. The cell is now so productive and cost-effective that competitive manufacturing sites within the Eaton group have not been able to match the cost per part.

The valves are even exported to sister companies in India and China, where one might think that production would be less expensive. Additionally, manufacture of two larger sizes of valve currently made in the US will be transferred to Havant during 2014.

Automation is the key, as it enables cost effective production anywhere in the world and dilutes the advantage of low wage economies. It also has the benefit of improving component quality.

Mr Branson stressed that every high precision hard turning project is different and delivery lead-time must factor in development of the process. Six months were needed for this application from start to finish. Even when the order was placed, the project was still only three-quarters complete. Taking the trouble to perfect every single aspect of production pays dividends.

Experimentation with different tooling is ongoing at Havant. CBN (cubic boron nitride) inserts are preferred, as their hardness allows the optimum 750ºC to 900ºC to be reached at the cutting tip. If the point of cutting is any cooler, the resulting built-up edge reinforces the tendency of the negative rake to cause vibration. There is also some intermittent cutting on the valve components, but it is in areas where tolerance is relatively open at 20 microns, so does not cause difficulty.

Work is continuing to identify better grades and to improve the toolholders with a view to increasing tool life by 30 per cent, which will lead to further savings and the potential for lights-out running.

Mr Camburn commented, “We are also looking closely at incorporating component washing and utilising the robot to perform in-process gauging, with direct feedback of tool offsets to the lathe control. Currently this is done manually. Another possibility is to add laser marking to the robot’s duties.

“Currently we inspect 100 per cent of the finished sleeves and spools using air gauges and comparators, so further cost could be taken out by introducing Cpk and moving to statistical inspection. A chute to take component samples automatically for SPC has already been built into the robot enclosure and there is provision to retrofit pallet recognition.”

To extend the benefits of the new process to other product groups, conventional spools may be clamped between centres and hard turned at Havant, instead of being centreless ground.

Some 2,500 of these additional spools are produced every day, so the automated cell will again provide cost benefits as well as consistency of manufacture and efficient quality control.