The remarkable aspect of this automation success story is that it has been achieved in the most problematic of scenarios, i.e. the production of relatively small batches of components between 1,000- and 2,000-off requiring short cutting cycles of between two and 10 minutes, a combination that necessitates frequent changeover of the production cell.

Hemlock’s owner Paul Cobb had exact figures to hand when interviewed. He said, “Typically, one of our 40-taper VMCs runs for 40 hours per week. However, a lot of the time the relatively slow spindle is not cutting – I estimate we get on average 45 percent utilisation. With the robotic Feedio load / unload system serving the latest Brother, we achieve 100 hours operation per week, sometimes more, and the uptime of the faster 30-taper spindle is 88 percent. 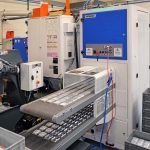 The Brother Feedio robotic component load / unload system extends to the left and rear of the M200X3.

“On this basis, overall production output is about five times that of one of our 40-taper machines. Additionally, the latter capacity needs the full-time attendance of an operator whereas the Brother cell occupies an operator for only about 20 percent of the person’s time. So there is a five-fold reduction in the labour cost content of components produced.”

He explained that the plug-and-play Speedio / Feedio cell costs about £800 per week to run including finance, labour and power, which he said “is not very much”. It arrived on the shop floor in March 2022 and, as already observed, produces similar output to five 40-taper machines with full-time operators. That is why Mr Cobb describes the benefits of his first ever automated prismatic component production cell as “absolutely astronomical” and “off the charts”.

What makes automation feasible for small batches of relatively uncomplicated components requiring short cycle times is rapid cell changeover within two hours, including swapping the cutting program and tools. It is largely down to Brother’s easy-to-use ChipLite conversational software that controls the handling robot and camera vision system. 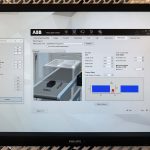 With Brother’s ChipLite software for programming the handling robot, it is an easy matter to enter parameters for the next job, allowing changeover of the Speedio / Feedio cell in under two hours, even if a different size of billet needs to be machined.

All that is needed is to key in via a touchscreen GUI the size of the new raw billet, the spacing on the conveyors and the gripper finger data. Connection of the robot program, generated by the dedicated on-board PC, to the VMC control system is via a Profibus link. Mr Cobb asserts that changing over a conventional robot-loaded machining centre and reprogramming it would take days rather than hours. 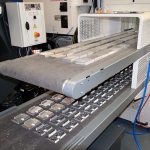 Close-up of the Feedio’s input and output conveyors. Raw billets are placed on the upper level and machined components emerge on the lower conveyor. All handling is performed automatically by a 6-axis ABB robot with the help of a camera vision system.

There are other makes of 5-axis VMC in the Stapleford factory, all 40-taper models. The Brother M200X3, with its 300 x 440 x 305 mm working volume and 16,000 rpm face-and-taper contact spindle, is the first 30-taper 5-axis machine on-site, the other eight Speedios being 4-axis models with a rotary indexer. 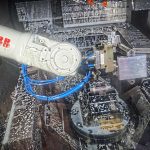 The effect of having an additional CNC axis on the M200X3 and using the machine in 3+2 or 4+1 positional mode is to deskill machine operation. It also reduces fixturing costs and balances more closely the machine’s cutting cycles with the time required for performing a second operation manually on another machine to finish the sixth face of components.

What tends to happen in practice in Stapleford is that foreman Rob Sinclair sets up the Speedio / Feedio cell when he arrives on Monday morning. It then runs for typically two days non-stop, virtually unattended, before it needs to be reset. It is the inexorability of component loading and unloading without any stoppages that Mr Cobb says underpins the cell’s very high efficiency and production output. 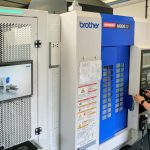 He also advised that every night shift in particular is much more productive with the automation, as all the operator needs to do is attend to swarf clearance, tool exchange and perhaps coolant supply. He or she is therefore free to complete other duties on the shop floor with very little interruption.

As to his choice of automated handling of the component itself, rather than a machine pallet with a component fixtured, Mr Cobb points to the couple of hundred different jobs routinely passing through his factory that are able to benefit from automation. They would need expensive pallets and bespoke jigs and fixtures, a production route that would not be economical. Furthermore, the footprint of such pallet change systems tends to be large.

The machined aluminium components will form part of a barcode printer. Here they are pictured after Op 10, ready for a second, manually-attended machining operation to mill material from the sixth face.

It is interesting that in 2014 when Hemlock Engineering, 90 percent of whose production involves machining aluminium, took the policy decision to migrate from 40-taper to faster 30-taper machines, the subcontractor gained the productivity boost that it was seeking due to cycle times that proved to be between 50 and 70 percent quicker than previously. However, what was not foreseen was that the Speedio machines would be so fast that one operator was committed full-time to each, so there was no labour cost advantage. It is exactly this problem that robotic loading and unloading solves. 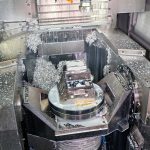 Working area of the 5-axis Speedio M200X3, showing the -30 to +120 degree trunnion configuration with rotary table driven by a torque motor (bottom centre) that enables in-cycle turning operations to be completed without refixturing the component.

In the first four months of operation, around 25 different components that were previously produced on 3- and 4-axis VMCs had passed through the automated Brother 5-axis cell. The jobs were about to start repeating, with the prospect of even greater gains the second and subsequent times a batch of components is produced.

The benefits of the production solution were so conclusive, including the small footprint on the shop floor and the low power consumption, that Mr Cobb almost immediately placed an order for a second identical cell, which is due for delivery in December 2022.