Headline Filters in Aylesford, Kent (www.headlinefilters.com) has taken a big step towards streamlining the manufacture of its components by adopting twin-spindle turning and 5-axis machining to reduce set-ups and take advantage of lights-out machining. 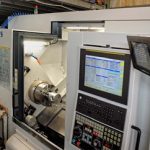 The Biglia B750-YS installed at Aylesford. The longest component produced by the filter manufacturer is 380 mm.

New process routes for around half of the factory’s production of bonded microfibre filter housings involve four new CNC machines installed between September 2018 and July 2019. They are three turning centres with Y-axis from Biglia, Italy, and a German-built Spinner machining centre with trunnion-mounted rotary table, all supplied by UK agent Whitehouse Machine Tools. 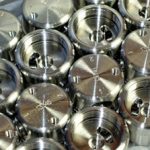 ‘112’ stainless steel head heads machined in one hit with the help of high pressure coolant in a Biglia B565-YS turn-mill centre.

A backlog in multi-operation turning and milling of a particular filter part, a complex stainless steel head designated ‘112’, prompted the manufacturer to look for a more productive solution. The obvious choice was a lathe with powerful driven tooling and twin opposed spindles to enable in-cycle machining of the reverse end of the component.

Space is limited on the shop floor in Aylesford and the machine initially considered was too large to be conveniently installed. Whitehouse demonstrated how the more compact Biglia B565-YS lathe which was half the price could do the job, provided it was fitted with double, triple and quad tool holders in its 12-station turret so that the requisite number of tools could be deployed.

Programs were written and time studies carried out at the supplier’s Kenilworth technical centre on this as well as two other components and the feasibility of all processes was confirmed. The first Biglia B565-YS was installed in Aylesford in September last year and ran for several months to clear the ‘112’ component production backlog. 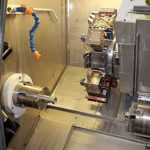 Rob Hibberd, a director of Headline Filters said, “As soon as we saw the lathe in action on our shop floor producing the stainless steel components in one hit, we knew it was the way forward and quickly ordered a second identical lathe, which arrived at the end of last year.

“The previous production method involved turning on two separate single-spindle lathes and three set-ups on a 3-axis vertical machining centre, so five ops in all. Total cycle time was 17 minutes including three minutes for repositioning the part on the VMC.

The new cycle time of 16 minutes on the Biglia is not much different, as its driven tooling cannot compete with the milling power of a machining centre. However, the big advantage now is that there is no inter-machine handling or work-in-progress and production is minimally attended, so the operator can look after several machines.

Even more importantly, we can take advantage of unmanned ghost shift running for extra production output. We gain up to eight hours overnight when machining aluminium and brass parts and a couple of hours when running stainless steel before the tips become blunt and the lathes shut down automatically.”

He added that a further advantage of single-hit production is that it is easier to hold tolerance, as no cumulative errors are introduced by repeated re-clamping. Run-out is better and ± 0.05 mm tolerance is easily held on O-ring seal faces. Surface finish is also improved due to the stability of the Biglia lathes and the ability to run modern tooling at the recommended feeds and speeds, so less subsequent polishing is needed. It is also notable that tool life is prolonged on these lathes due to their rigidity. 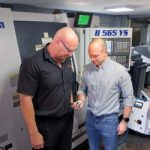 Rob Hibberd (right) and Jason Rose in front of one of the Biglia B565-YS lathes at Headline Filters, Aylesford.

In another before-and-after example, an aluminium ‘360’ filter head previously needed turning on a lathe and prismatic metalcutting on a machining centre, taking 12 minutes including handling between the two machines. The part is now produced in one hit in an 11-minute cycle on a B656-YS bar auto. Again, the main benefits are a reduction in work-in-progress, better accuracy and the ability to automate production. 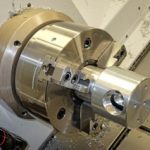 This aluminium ‘390’ filter head can be produced in its entirety in one hit on the Biglia B750-YS. 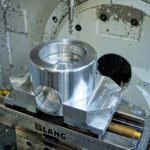 Alternatively, the ‘390’ head can be turned only on the Biglia B750-YS or on the pre-existing large lathe and finished on the Spinner U5-630 5-axis machining centre, as shown here. Headline Filters mixes and matches both process routes according to machine availability and production requirements.

Whitehouse facilitated unattended running by fitting to each lathe a Hydrafeed MSV80 bar magazine for feeding one-metre stock through the spindle and providing a Rota-Rack rotary parts accumulator to collect finished parts delivered via a parts catcher and component conveyor. The B565-YS lathes were supplied with a larger spindle bore than usual, 75 mm rather than 65 mm, to enable production of Headline Filters’ larger parts needed in high volumes.

Above this diameter batch sizes are lower, but recently the manufacturer’s US distributor started to request bigger products in higher quantities, which put pressure on the company’s single large-capacity turning machine. Positive experience with the first two Biglias pointed Mr Hibberd in the direction of Whitehouse again, which in April 2019 supplied the largest-capacity version of a twin-spindle Biglia 750-YS 8-inch chucker with Y-axis and C-axis.

It is capable of turning components up to 552 mm diameter by 765 mm long, far larger than needed. More pertinently for Headline Filters, it is possible to use a bar puller in the turret or alternatively the counter spindle to feed stock up to 100 mm diameter through the bore of the main spindle into the working area to simulate the advantages of having a bar feeder. A 38 kW main motor and powerful 17.5 kW driven tools in the 16-station turret capable of rotational speeds up to 10,000 rpm plus the availability of high pressure coolant promote high productivity machining. 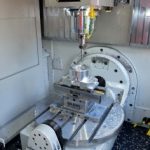 Unusually, the trunnion on the U5-630 rotates around the Y-axis rather than the 630 mm X-axis. It is because the machine’s larger counterpart has a fixed table alongside the above arrangement, whereby when the rotary table lies horizontally the full 1,520 mm X-axis can be used for 3-axis machining.

An early example of time advantage using this machine involved the production of a ‘380’ aluminium filter head in one operation in a cycle time of 15 minutes 50 seconds. Previously, using the other large lathe which is of single-spindle design without driven tools, the part had to undergo two operations and then be transferred to a machining centre for milling and drilling. The three operations took 21 minutes 15 seconds plus handling between machines.

As 15,000 of these parts are needed annually, the production cost saving is considerable. Work-in-progress is eliminated, avoiding having batches of typically 400 part-finished components in storage. Moreover, as Mr Hibberd pointed out, each part can be assembled into a filter for delivery and invoicing straight away, not days or weeks later after all machining operations have been completed.

A difficulty in the factory used to be that six lathes with limited or no live tooling were feeding components to two overloaded, entry-level VMCs with 7,000 rpm spindles for milling and drilling. That problem was alleviated by the arrival of the three Biglia lathes with their powerful driven cutters, so the machining centres were able to cope. However, with an eye to the future Headline Filters decided to invest in its first 5-axis machining centre to boost prismatic metalcutting capability.

The Spinner U5-630 5-axis VMC supplied by Whitehouse in July this year with12,000 rpm BT40 spindle provides more productive machining, as higher rotational speeds increase metal removal rates and also enable the use of more capable, contemporary tooling. A large magazine for 32 cutters, high pressure coolant and Blum probing for setting tools and workpiece datums form part of the production package. The extra power and rigidity will help when producing filter parts from tough materials, not only stainless steel but also nickel and titanium alloys. 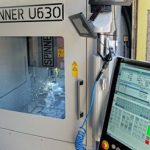 The Spinner U5-630 with Siemens 840D-SL control on the shop floor at Headline Filters.

ason Rose, engineering and workshop manager at the Aylesford factory commented, “We use the Spinner mainly in 3+2 axis mode for automatic workpiece positioning to reduce the number of manual set-ups.

“Nevertheless, we have a certain amount of contour milling to do and when I design new products in future, I will have greater flexibility to incorporate features that would be uneconomic or impossible to complete on a 3-axis or even a 4-axis VMC.”

He also advised that the U5-630 is significantly faster at cutting metal than the other machining centres on site. In one example, a 12-minute cycle was reduced to seven and in another, 45 minutes was reduced to 20. There is potential to improve on these times further as Headline Filters’ operators become more familiar with the new cutters they can now use as well as the Siemens control system, which is the first on site.

In conclusion, both Rob Hibberd and Jason Rose remarked on the high standard of operator training provided by Whitehouse, in both Kenilworth and Aylesford, which they said was not only exemplary but also without limit or additional charge. Telephone support is similarly comprehensive and if a service engineer is called out, they are on-site the next day at the latest. This back-up has been invaluable to Headline Filters, as its staff had no previous experience of either Fanuc or Siemens controls, or of twin-spindle turning, or of 5-axis machining. 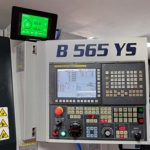 The Fanuc 32i-B control on the Biglia lathe is supplemented by a production monitoring system (top left) sourced from Machine Metrics.