Jaguar Land Rover (JLR) is enjoying an unprecedented upturn in sales since Tata Motors took over the group in 2008, making the automotive manufacturer a major driver for growth in manufacturing across the West Midlands and beyond.

The right products (luxury cars and utility vehicles) at the right time (burgeoning middle classes in developing countries with the money to buy them) made to the right quality and price are central to the company’s success.

Managing that success brings challenges along the supply chain, however, due to difficulty in anticipating global demand for the vehicles, which makes production planning problematic. As an illustration, JLR recently announced a significant expansion of production. Shortly afterwards, the company’s agent in China dropped in to say they would take all of the extra cars, in addition to their current deliveries. 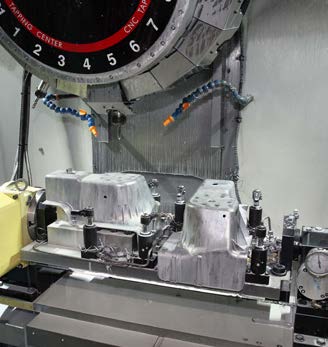 Suppliers like Worcester based JVM Castings, the largest independent aluminium die casters in the UK, must respond promptly to constantly changing demands from JLR and its other customers. So also must equipment suppliers to JVM, such as Whitehouse Machine Tools in Kenilworth, the UK agent for Japanese-built Brother vertical machining centres and Akari horizontal machining centres from Taiwan.

JVM produces nine different JLR chassis castings in Worcester and a further nine at its Tamworth facility, destined for the lines building all variants of the Range Rover and Range Rover Sport. Production projections of these vehicles are expected to exceed 3,000 per week by the end of 2013 and further expansions are planned for 2014. The new predictions dwarf the original project volumes outlined in 2010.

Whitehouse and JVM adopt a partnership approach for reacting quickly to changes in production volume. When 2,000 of each type of casting per week was predicted, the company intended to mill, drill and tap them on Brother machining centres that were supplied in 2010 to fulfill another contract. After weekly quantities rose to 3,000, it was decided to install four new Brother Machines, designated TCS2DN- O, to form a separate cell.

Now that volumes for JLR are expected to expand further, JVM has added three of the pre-existing Brother TC-S2DN machining centres to form a line of seven machines to process eight of the nine casting types, working 24 hours a day, 5 days a week. Total weekly production output of machined components from the Brother manufacturing line is close to 30,000 units / week. JLR has an aggressive expansion plan over the next years, so this will undoubtedly mean the number of parts required will continue to rise. 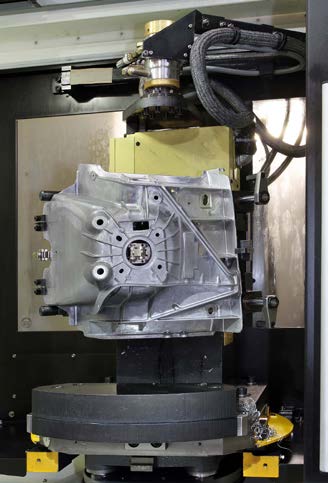 Turnkey engineering of the Brother line

Speed is of the essence when machining automotive parts from aluminium die castings, as the industry is competitive and margins are tight. Spindle power is not an issue, since the depth of material removed is typically one millimetre. It is high axis feed rates that are essential to enable the cutter to get around the castings quickly, as well as also rapid tool changes to minimise idle time.

Aluminium is used increasingly in modern vehicles to reduce weight and emissions. JVM is therefore in a good position to increase its business as customers demand structural chassis components made from premium aluminium grades, rather than pressings. High-speed metal cutting will always be necessary for profitability.

Steve Hoole, Commercial Director of JVM Castings commented, “We have other 30-taper vertical machining centres on site from various suppliers. The Brother machines are fast and reliable, which is part of the reason we continued to use them for the capacity expansion. The earlier models we installed exceeded their guaranteed production rate.

“A second reason was the back-up provided by Whitehouse Machine Tools in providing a turnkey so- 2 lution, programming nine new components and proving them out, which was an extensive task that their applications engineers supported proficiently, helping to complete the schedule in a compressed time frame.

“The turnkey installations complete with tooling packages allowed us to run the new machines 24/5 within a week of them arriving on the shop floor.”

Tim Whitehouse, Managing Director, Whitehouse Machine Tools, added, “The production environment at JVM is intensive in order to maintain competitiveness and operators load and unload several machines, so need as much help as possible.

“We configured the Brothers with hydraulic automatic fixtures to avoid manual clamping and air sensing to verify that components are loaded before the cycle can start. “Each machine has doors that open automatically when the cycle is finished, as it is more evident to the operator than a light or a buzzer.

“Both of these functions are controlled by an onboard PLC in the Brother control, which can be interrogated for troubleshooting.

“The X-axis on the -O type Brother TC-S2DN is extra-large at 700 mm and we made sure that the trunnion- and-tailstock 4th axis rotary indexing units allow the full table travel.

“To enable some of the larger castings to swing horizontally on the trunnion, column risers were fitted to the machining centres at the factory in Japan to increase the distance from the spindle nose to the table surface.

“We also equipped the machines with sophisticated chip management complete with rotary drums and back flushing to maintain coolant cleanliness, which is also important for high volume production.”

Moving elements on the Brothers are light so there is low inertia, resulting in fast acceleration to 50 m/min rapids in all axes. It takes 1.6 seconds from chip to chip, due to fast, servo-driven automatic tool change from the 21-station magazine, ATC being completed without having to stop the Z-axis feed. Idle times are consequently shorter than on similar machines.

The Brother TC-S2DN-O is also quick in cut due to the 16,000 rpm spindle and cutting feeds up to 20 m/min. 70 bar through-tool coolant increases drilling and tapping productivity, especially on deeper holes, and dramatically extends tool life. All fixtures are interchangeable between machines for maximum production flexibility.

Installed in Worcester at the same time as the Brother machines was one of the country’s first Akari horizontal machining centres (HMCs), a 5-axis model HS-450i with twin pallet changer. Whitehouse was appointed sole UK agent by the Taiwanese manufacturer, Averex Automation, in 2012.

JVM needed extra capacity to machine an aluminium shock tower casting, designed to link the Jaguar chassis with its suspension, and transferred production from other HMCs on site to the Akari as component numbers grew.

The machine has been fitted with a Nikken 2-axis table to provide full 5-axis capability, operation being by closed-loop control from the Fanuc 31i NANO CNC. Hydraulic fixtures for automatic clamping have been supplied to maximise productivity, as the requirement for 350 left- and right-hand pairs per week is rising quickly to 550.

Mr Hoole said, “As ever in our industry, these parts are price-sensitive. A 5-axis machine was ideal for keeping down the number of operations and hence the unit manufacturing cost, but such machines tend to be expensive, raising overheads and lowering the profit margin.

“The Akari was less than 75 per cent of the price of the other 5-axis HMC we considered, which really made the project viable.”